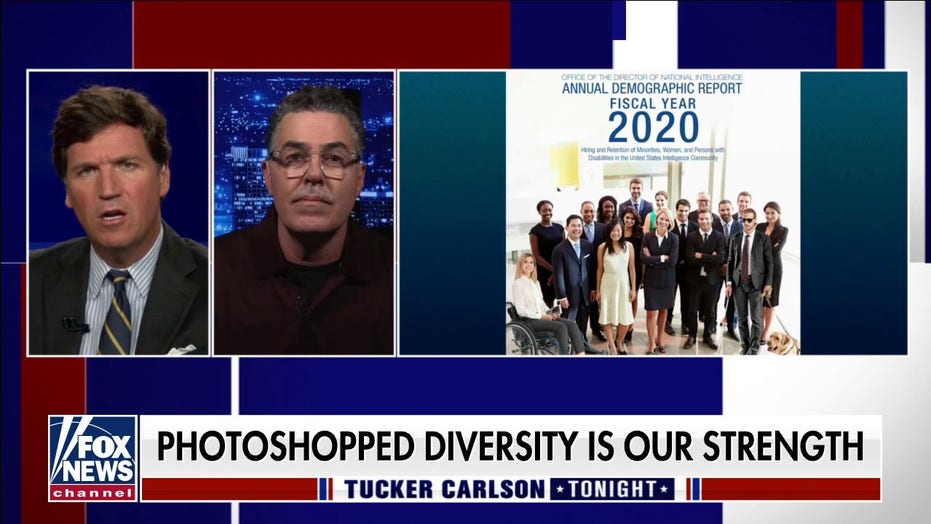 Commentator and comedian Adam Carolla joined “Tucker Carlson Tonight” on Friday and sounded off after the Office of the Director of National Intelligence touted its “Intelligence Community Fiscal Year 2020 Annual Demographic Report” – which was later alleged to feature doctored and merged stock photos of various unidentified people that collectively were intended to appear diverse.

The name of the primary stock photo, available on Shutterstock, is “Portrait Of Multi-Cultural Office Staff Standing In Lobby,” while the collage featured two other photos of a blind man with a guide dog and an individual in a wheelchair.

“[It] has nothing to do with job performance but make me think as I was watching the opening monologue, those people who know World War II history know that in 1944, the Japanese government sent over incendiary bombs that went up to the jet stream and they were going to float over to the Pacific Northwest and they were going to come down and start fires in the Pacific Northwest and the idea was we would have to then fight our own fires on our own soil and we couldn’t fight them in the pacific theater and this is analogous to that,” Carolla continued.

He said that, in that way, China and Russia must be very excited and pleased to see “wokeness” now take over the intelligence community, as the host implied the report begets deference to identity and diversity over more germane factors.

He noted that it has only been 5 years since Barack Obama left the White House as the first Black president and that it only took that short interim for “race hustlers” to ignore that achievement and “start a war on our own soil” against ourselves.

“With their homogenous population – China and Russia – are just free to use their technology to shut down our pipelines and hack into our infrastructure while we are using our technology to Photoshop,” he said.

‘The Network Wars Have Begun’: China’s…

‘Back then I was silent’ After suffering years of harassment…