The panel on “The Five” debated Wednesday whether President Biden agreeing to a no-preconditions meeting with Russian President Vladimir Putin amounted to a “gift” to the former KGB agent. News of the meeting coming as a staunch Putin ally had a Greece-to-Lithuania flight diverted to arrest a critical journalist, and as hackers inside Russia are suspected for hacking the U.S.’ Colonial pipeline.

Host Jesse Watters alluded to the suspicion that the mainstream media would be hammering Donald Trump if he agreed to a no-preconditions meeting with a U.S. rival, pointing to the wall-to-wall criticism that erupted when the Republican met with North Korean dictator Kim Jong Un.

“Isn’t the media going to accuse Biden of being a KGB agent – and what about the Colonial Pipeline hack?” he asked.

Blackhat hackers suspected to be inside Russia successfully hacked into the Colonial Pipeline earlier this month, causing gas stations from Baltimore to Birmingham to run out of fuel.

Watters added that Biden had only rhetoric thus far to offer Putin in response to the hack, and noted he slackened restrictions on a nearly-completed NordStream-II pipeline between Russia and Germany.

In contrast, one of Biden’s first acts in office was to unilaterally cancel the Keystone XL Pipeline between Alberta, Canada, and the Gulf Coast. 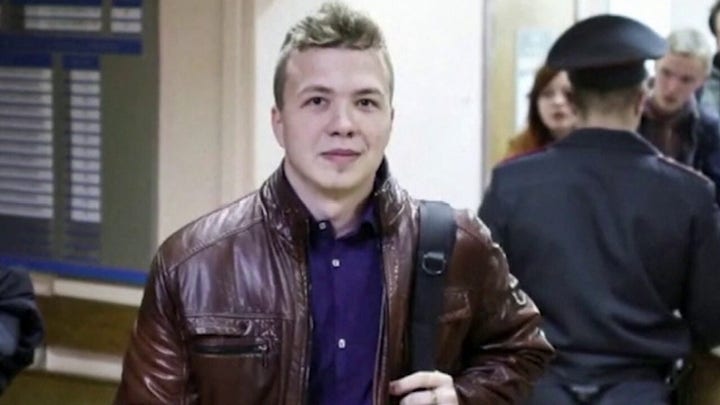 Later, fellow host Dagen McDowell keyed into the widely-condemned move by Belarusian President Alexander Lukashenko to reportedly send a MiG fighter jet to force an Irish airline’s flight from Athens, Greece, to Vilnius, Lithuania, to divert to Minsk, the Belarusian capital, saying they feared there was a bomb on board.

“In terms of the timing, not just the Colonial Pipeline hack, it’s not just a gift to Russia, the pipeline into Germany, what about in Minsk: Lukoshenko is Putin’s proxy in Belarus,” she said.

“The timing does look like a reward, a giant cake wrapped in a box with a huge bow on it. What is Biden going to say to Putin? ‘Cut it out’?”

She remarked that if Biden truly believes Putin, 68, is a “killer”, it is unusual therefore for him to actively seek to sit “next to a murderer.”

Later in the hour, host Juan Williams announced that, as the program will return to its New York City studio, he will remain in Washington and that Wednesday was his last hosting the program.

Williams assured viewers he is remaining active at Fox News as a political analyst, a capacity in which he is also often seen on programs like “Fox News Sunday with Chris Wallace”.

“It’s been going on seven years since I have been a host of this show. The show’s popularity has grown every single year. So, thank you. Thank you so much to you, the viewers, thank you,” the longtime journalist said.

Nato calls on Europe to diversify energy supply amid Russia…

Russia To Show Off Military Might, Grip On Belarus During…

The GES-2: House of Culture opens in Moscow

Russia suspends Nato mission in response to expulsion of its…