KILMEADE: We are seeing the fallout from years of Democratic calling out this country’s past, and calling it racist of late. We warned you last night, while the left sought to divide America in many ways, Vladimir Putin was diligently taking notes. He waited until today while the world was watching to unleash a tailored barrage of rebukes targeting America’s already fractured internal relationships. You know, any time reporter asked him about Russia’s outrageous behavior on the world stage, he had an answer ready. It was pretty simple. He played the “what about-ism card?”

As for President Biden, he was waiting in the wings, instead of standing on stage with Putin, showing the world we are strong united and will reject Russia’s bleak description of America, he would have been there to retort, our president let Vladimir Putin paint himself and his nation as oppressed. It doesn’t even sound like President Biden was even watching the whole thing.

WATCH THE FULL MONOLOGUE BELOW 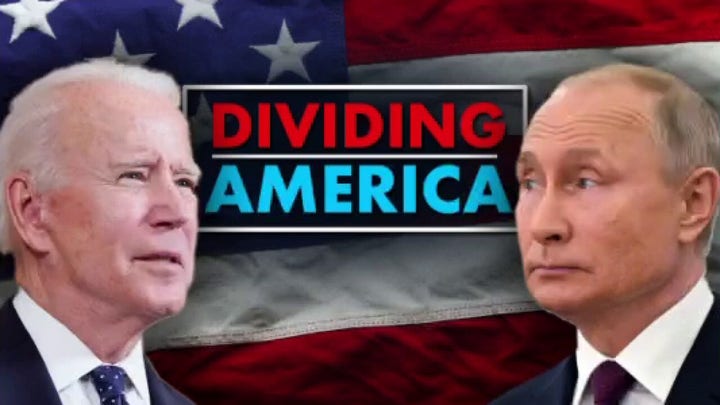 At Summit With Putin, Biden Raises Issue Of RFE/RL’s ‘Foreign Agent’ Designation And Its ‘Ability To Operate’ in Russia

Putin and Lukashenko move to integrate economies of Russia…

Unlearned lessons Dmitry Medvedev’s op-ed on the ‘return to…

‘We have other problems’ As the world worries about an…