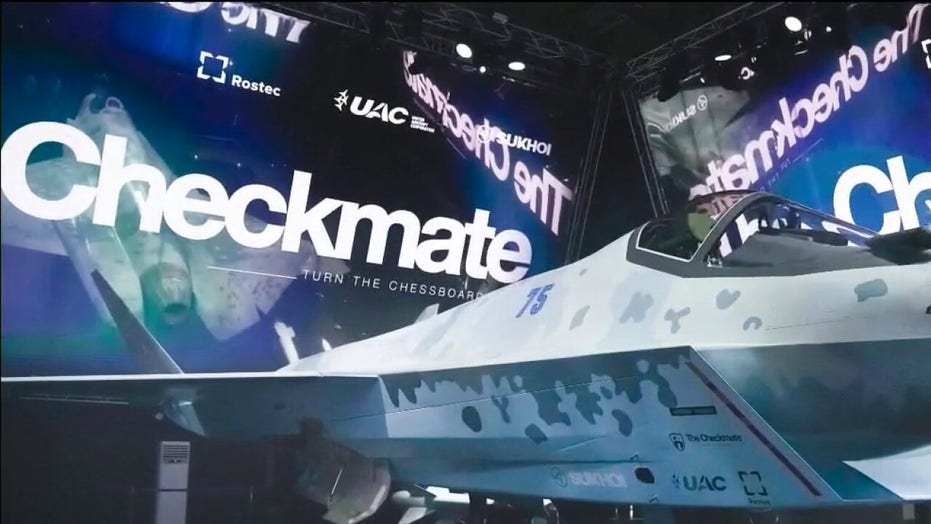 The prototype of the Sukhoi fifth-generation stealth fighter was revealed at the MAKS-2021 International Aviation and Space Salon, Reuters reported. The show opened Tuesday in Zhukovsky, outside Moscow.

Fifth-generation refers to the jet’s stealth characteristics, a capability to cruise at supersonic speed as well as artificial intelligence to assist the pilots, among other advanced features.

“What we saw in Zhukovsky today demonstrates that the Russian aviation has a big potential for development and our aircraft making industries continue to create new competitive aircraft designs,” Putin said in a speech at the show.

The jet was designed to reduce service costs. “Our aim is to make the cost per flight hour as low as possible, to make it economical not only to buy but also to operate,” Yury Slyusar, Russia’s United Aircraft Corporation head, said, according to Reuters.

RUSSIA WARNS US OVER HYPERSONIC MISSILES IN EUROPE, COULD LEAD TO ‘INADVERTENT CONFLICT

It is expected to be airworthy by 2023 and the country plans to produce 300 of the fighters over 15 years starting in 2026, according to Reuters.

Oleg Panteleyev, head of the Russian Aviaport analytical agency, said the fighter jet could be a rival to the U.S. F-35 stealth fighter.

“We must join other nations that sell such aircraft,” Industries and Trade Minister Denis Manturov said after mentioning other similar foreign jets.

The jet’s price tag will be between $25 million to $30 million, Rostec, the state-owned aerospace conglomerate, said, adding it expected buyers from the Middle East, Asia and Latin America, according to Reuters.

Rostec said the Russian air force is also expected to place an order for the new fighter.

The designers said the new design could be converted to an unpiloted version and a two-seat model.

The prospective warplane, marketed under the project name Checkmate, has one engine and is designed to be smaller and cheaper than Russia’s latest Su-57 two-engine stealth fighter, also built by Sukhoi. It can fly at a speed of 1.8-2 times the speed of sound, has a range of 3,000 kilometers (1,864 miles) and a payload of 7,400 kilograms (16,300 pounds), the jet’s makers said.

The sales of warplanes have accounted for the bulk of Russian weapons exports, but the two-engine Su-30 and Su-35 fighters have faced growing competition in global markets.

Rostec ran an aggressive advertising campaign in the days before the air show, publishing a picture of the new fighter hidden under a black tarpaulin with “Wanna see me naked?” written under it. It also posted a featuring adulatory customers from India, the United Arab Emirates, Argentina, Vietnam and other countries, reflecting export hopes.

The Kremlin has made modernization of the country’s arsenals a key priority amid tensions with the West that followed Moscow’s 2014 annexation of Ukraine’s Crimean Peninsula.

The unveiling comes a day after Russia warned Washington not to deploy hypersonic missiles in Europe.

“We would like to remind @PentagonPressSec that potential deployment of any [American flag] hypersonic [missile] in Europe would be extremely destabilizing,” the ministry of defense tweeted. “Their short flight time would leave [Russian flag] little to no decision time and raise the likelihood of inadvertent conflict.”

To 2035 and beyond Belarus unveils draft constitutional…

Recycling of Forms: group show on 23-30 July in Paris