Не зна́ю, как вы, но в декабре́ мне о́чень хо́чется спать!1 I don’t know about you, but I really want to sleep in December Whether it’s the end-of-the-year blues or the fact that we only get about 8 hours of daylight – either way, I envy my childhood years when sleep was something I was encouraged to do. If only I could have those afternoon naps in kindergarten and 9pm kids bedtime shows.

Speaking of which, I would like to share a beloved Russian TV show for kids Споко́йной но́чи, Малыши́!2Goodnight, Little ones! and a few Russian lullabies that I grew up with. Lullabies are a delightful way to get connected with the culture and the language you are learning. Those melodies and words are the ones that a form a nurturing connection and a strong bond between a baby and its parents. Likewise, you can find a new appreciation for the beautiful melodies and the vocabulary you are learning in Russian.

Колыбе́льные пе́сни3lullaby songs comes from the word колыбе́ль (sometimes referred to as ‘лю́лька’), which is a cradle, also known as a rocker or bassinet. People rarely use this word in day-to-day conversations these days but it evokes the most comforting and soothing images. I suspect that the soft Russian л sound has a lot to do with it, since two of the most nurturing words share that softness, as in любо́вь4love and ла́ска5tenderness or endearment. 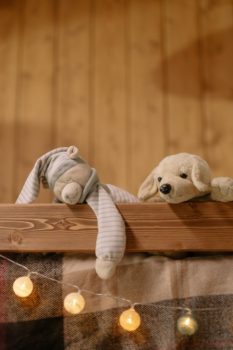 This is Спокойной Ночи, Малыши! just as I remember it when I was five.

All the episodes have the same format like the one above. The ‘adult’ host and the other puppet characters, (here we have the piglet Хрюша and the dog Филя) are dealing with some kind of problem or talking about toys and such. Either way, the content is very informative or educational in some type of way. And at the end, there is always a little cartoon or a part of a movie for kids. The show still airs today and has been helping kids (and parents) get ready for bed since 1964.

Most importantly, every kid in Russia will recognize the show’s lullaby, although different generations would associate different animated clips with it. 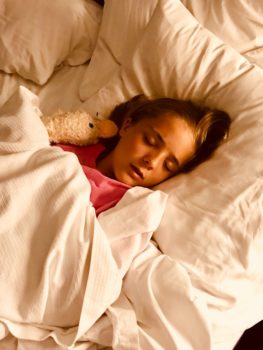 In the clip above, when Хрюша и Филя play a song for the adult host, Юля, they show her a little animation of another very well-known Russian lullaby Спи моя радость усни: 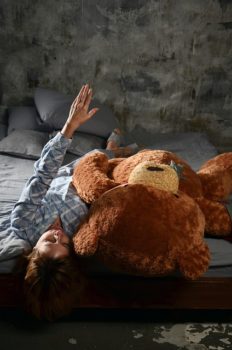 Despite the popularity of the show Спокойной ночи, малыши! the most famous Russian lullaby is Баю–баюшки–баю. This melodic phrase doesn’t really mean anything but is similar to “Hush little baby, don’t say a word”. There are many variations of this bedtime song but my mom mostly sang the following four lines from it:

The premise of the lullaby above is that the baby shouldn’t lie on the edge of the bed, because otherwise a grey wolf will come and bite you on the side of your tummy. Nothing like a sprinkle of fear to help a little one fall asleep.

One last thing before I sign-off – don’t forget to read Nadya’s blog on other ways to say ‘goodnight in Russian’.

1 I don’t know about you, but I really want to sleep in December 2Goodnight, Little ones!3lullaby songs4love5tenderness or endearment

‘We still haven’t ruled out aliens’ After journalists find…

U.S., Europe Show Unified Front Ahead Of Talks On…