Yes, you read the title right. This blog is only partially about Russia’s favorite grain гречка (buckwheat). We are going to talk about a wonderful Russian music artist on the rise that goes under the name Гречка (Grechka). It was actually Ryan’s delightful blog on Russian breakfast that originally made me hungry for some buckwheat porridge (гречневая каша или гречка). After reading it, I decided to google new recipes and that’s when I saw that one of the first suggestions after I typed гречка was «Гречка певица» (Grechka singer). That was quite intriguing since all the other search options were food related (buckwheat in an instapot, buckwheat with mushrooms, buckwheat how to cook, buckwheat in English): 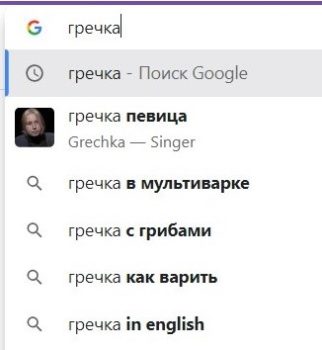 And by the way, Ryan is absolutely right – Russian kindergartens almost always give кашу на завтрак. I ate my fair share of манная каша but now prefer гречку because it is much healthier. The transition from one porridge to the other is similar to how some of my peers in the US eventually switched out the colorful sugary cereal for oat bran.

People usually make гречка with just a bit of salt and add a hearty spoonful of butter once it is cooked. But unlike semolina porridge you can substitute butter with healthy oils of your choice. There have been numerous blogs about this wonderful grain: from how demand for grechka rose by 66% in March of 2020 during the panic of lockdown purchases or a whole blog который поёт дифирамбы гречке.

Back to the music artist

Once I listened to her tracks I recognized her one song Люби меня, люби that brought her the most popularity and which she performed на шоу Вечерний Ургант.

Гречка took the chorus from a summer hit Люби меня, люби by the band Отпетые Мошенники, a pop music boy band that was huge in late the 90s and early 2000s. Their song Люби меня, люби has very different lyrics than Grechka’s, you can see it here. I certainly grew up watching their music videos for “Обратите Внимание“, “Граница” (with Леонидом Агутиным), and, of course, their hit with A’Studio “Сердцем к сердцу”. 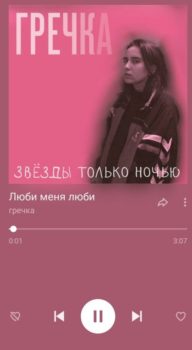 While I haven’t explored all of Grechka’s albums yet, her music definitely makes me feel like I am back in high school and making a pop-rock / grunge punk playlist on my old Motorola. Some of my favorites so far are “меня нет” и “Здесь были”.

You can explore both Гречка and Отпетые Мошенники on YouTube, I also saw that they are available on Spotify or Yandex music. The latter is one of the most popular music streaming platforms in Russia and post-Soviet countries.

What Russian artists are your favorite?

Biden to unveil Russia sanctions over SolarWinds hack and…

Biden fails to achieve unity on climate as China, Russia…