Images of a crossed-out Ukrainian flag and map of the country accompanied the message.

Officials said it is too early to draw conclusions as to who is responsible for the attack, but they pointed to Russia’s “long record” of cyberattacks against Ukraine. The attack follows the stalemate of security talks between the U.S. and Russia. 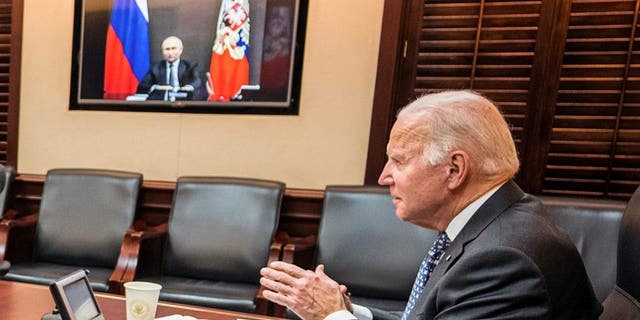 U.S. President Joe Biden holds virtual talks with Russia’s President Vladimir Putin amid Western fears that Moscow plans to attack Ukraine, during a secure call from the Situation Room at the White House in Washington, U.S., December 7, 2021. (The White House/Handout via REUTERS. THIS IMAGE HAS BEEN SUPPLIED BY A THIRD PARTY.)

The U.S. estimates Russia had massed about 100,000 troops near Ukraine, a buildup that has stoked fears of an invasion. Moscow says it has no plans to attack and rejects Washington’s demand to pull back its forces, saying it has the right to deploy them wherever necessary.

Ukraine foreign ministry spokesperson Oleg Nikolenko wrote on Facebook that “specialists have already started restoring the work of IT systems, and the cyber-police has opened an investigation.”

PUTIN IS PICKING A FIGHT HE CAN’T WIN WITH UKRAINE

European Union diplomat Josep Borrell condemned the attack and told reporters that “all our resources” will be available to tackle the cyberattack.

“Sadly, we knew it could happen,” Borrell said. “It’s difficult to say (who is behind it). I can’t blame anybody as I have no proof, but we can imagine.”

And the U.S. has expressed concern that Russia may prepare for an imminent invasion, with one official telling Fox News that Russia has already prepositioned a group of operatives to conduct a false-flag operation in eastern Ukraine to provide a pretext for invasion.

Department of Defense press secretary John Kirby told reporters that “It’s too soon to say that it’s part and parcel of a false flag” operation.

“These were disruptive attacks, cyberattacks,” Kirby explained. “So I don’t want to go there, but, again, this is a piece of the same kind of playbook we’ve seen from Russia in the past.”

This would follow the same pattern that preceded the 2014 invasion of Crimea, and the official said that Russia could start making accusations against Ukraine by mid-February.

Last month, Moscow submitted draft security documents demanding that NATO deny membership to Ukraine and other former Soviet countries and roll back the alliance’s military deployments in Central and Eastern Europe. Washington and its allies have refused to provide such pledges, but said they are ready for the talks.

Sweden’s foreign minister, Ann Linde, said the west must stand up to any Russian aggression. “We have to be very firm in our messages to Russia, that if there are attacks against Ukraine, we will be very harsh and very strong and robust in our response,” she said.

Peter Aitken is a Fox News Digital reporter with a focus on national and global news.

Russia refuses to allow European planes to land in Moscow

Alexei Navalny moved to hospital as fears grow for life of…

Russian Human Rights Association Shuts Down Amid Fears Of…