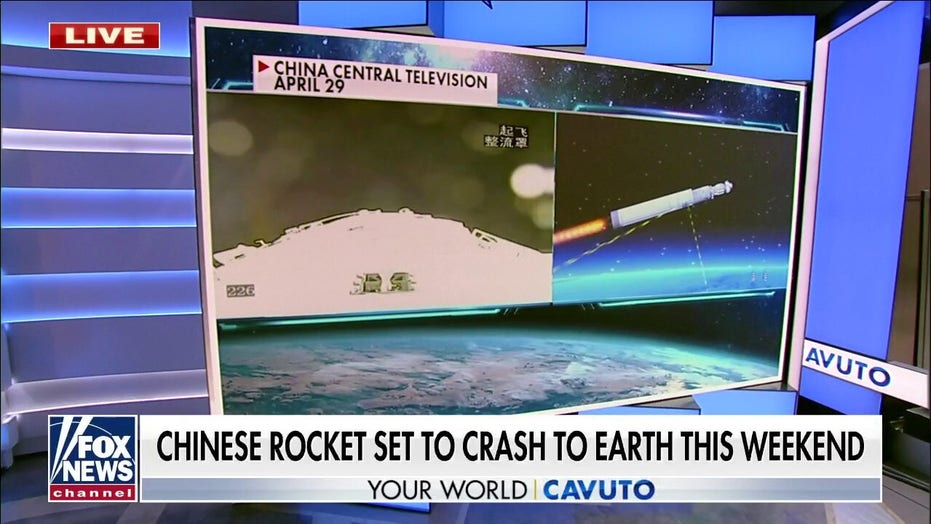 The core of China’s Long March 5B rocket is predicted to re-enter the Earth’s atmosphere in a matter of hours, but scientists and government agencies still cannot pinpoint the point of impact.

Core, or first-stage, rockets normally don’t go into orbit like the Long March 5B, instead making a controlled re-entry shortly after launch.

However, this rocket — launched to carry a module for China’s first permanent space station on April 28 — was not designed with safeguards that would help steer the spacecraft away from land or villages off of Africa’s Ivory Coast, where more “shrapnel” from a Long March 5B rocket crashed last May.

Dr. Jonathan McDowell, an astronomer at the Harvard-Smithsonian Center for Astrophysics, explained to Fox News on Friday that while the core’s orbit is known “really well,” what’s uncertain is the density of the atmosphere.

The tumbling “dead hunk of metal” is traveling at a speed of 18,000 mph “relatively horizontally” around the Earth — a circle that shrinks due to friction with the atmosphere, heating the rocket stage.

“And, eventually, it gets low enough that the drag on it just gets way, way bigger very quickly. And, instead of continuing to orbit it just sort of plummets down and as it plummets down it gets even hotter…the lower of temperature of metals aluminum melt and the thing breaks apart into a bunch of shrapnel,” he said.

According to NASA, space weather is created by activity on the sun’s surface, “spewing” gas and particles known as solar wind into space that are charged with electricity.

The Earth is largely protected from solar winds due to both the planet’s magnetic field and its protective atmosphere, the agency said.

Solar activity affects the density of the upper atmosphere, a factor that can impact the time at which the core has slowed down enough to re-enter the atmosphere.

“And, space weather is as hard to predict as Earth weather. So, you know, we can do an okay but…but the further out you’re trying to predict the weather, the harder it is to get right,” McDowell noted.

Headwind and the shape of the object also affect how much drag it experiences and its slowing rate, leading to a kind of prediction roulette.

“What they do is they Monte Carlo it. They make a million guesses about what the atmosphere is going to do and how the rocket’s going to tumble and throw those darts at a board and see what the distribution of answers is,” the astrophysicist added.

The narrower the distribution of answers — the smaller the window of time — the easier it is to predict the weather or rocket re-entry.

In this photo released by China’s Xinhua News Agency, a Long March 5B rocket carrying a module for a Chinese space station lifts off from the Wenchang Spacecraft Launch Site in Wenchang in southern China’s Hainan Province, Thursday, April 29, 2021. China has launched the core module on Thursday for its first permanent space station that will host astronauts long-term. (Ju Zhenhua/Xinhua via AP)

On social media, comments and questions from concerned Earthlings were flung almost as fast.

Were they in the path of the core?

McDowell said that while the probability of property damage could not be really small because it has already happened before, there’s about a one in 80 billion chance that it would hit those worried about being so unlucky.

Nevertheless, the Federal Aviation Administration (FAA) told Fox Business on Friday that it was working with the North American Aerospace Defense Command (NORAD) to track any impact the rocket might have on commercial air travel.

Defense Secretary Lloyd Austin said Thursday that the U.S. has no plans to shoot down the 100-foot-long debris.

In this Saturday, April 24, 2021 photo made available by NASA, the SpaceX Crew Dragon capsule approaches the International Space Station for docking. SpaceX’s four astronauts had barely settled into orbit on Friday, April 23, when they were ordered back into their spacesuits because of a potential collision with orbiting junk. It turns out there was no threat, the U.S. Space Command acknowledged Monday, April 26. The error is under review. (NASA via AP)

Wang Wenbing, a spokesperson for China’s Foreign Ministry, told reporters on Friday that Chinese authorities would release information about the re-entry of the rocket in a “timely manner” and that “the vast majority of the devices will be burnt up and destructed during the reentry process, which has a very low probability of causing harm to aviation activities and the ground.”

McDowell told Fox News that the Chinese are “lying through their teeth” and “just playing the odds,” highlighting that after NASA’s almost 100-ton Skylab fell on a small Australian town in 1979 manufacturers made sure that big rocket stages did not end up abandoned in orbit and included steering and stabilization mechanisms and a restartable engine.

“So, I think there’s absolutely no excuse for this kind of big re-entry to be happening,” he said.

The core’s uncontrolled re-entry is also symbolic of a larger issue in space exploration: a “very serious space traffic problem” that McDowell is urging nations to address.

As space leaders like Russia, China and the U.S. continue to send satellites into orbit and conduct other missions, the probability of collision also increases.

When NASA’s SpaceX Crew-2 mission launched to the International Space Station at the end of last month, the astronauts were ordered back in their spacesuits and told to brace for collision with an unknown object.

It turned out to be a false alarm, but what if it wasn’t? 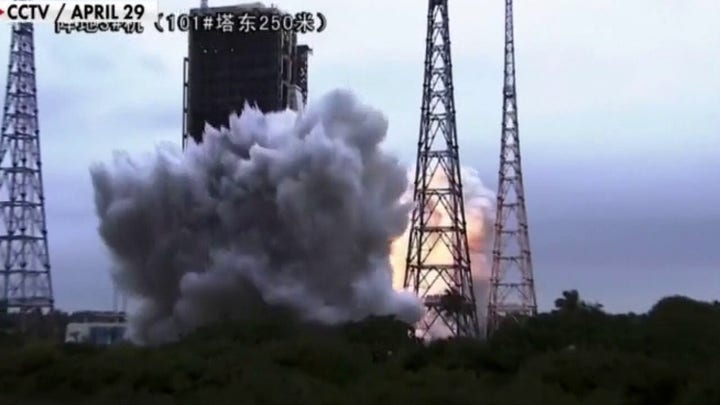 “I would say if we’re carrying on doing what we’re doing, we should expect to see in the next few years at least one major accidental satellite collision,” McDowell said, calling for a “stronger regime of control.”

He said that it was an “intrinsically global problem” that cannot be solved by U.S. Space Force alone and needs to be done with diplomacy, international agreements and eventually an “international space traffic control.”

White House Press Secretary Jen Psaki told reporters on Wednesday that the U.S. is committed to “addressing the risks of growing congestion due to space debris and growing activity in space” and wants to work together with the international community to “promote leadership and responsible space behaviors.”

“It’s in the shared interests of all nations to act responsibly in space to ensure the safety, stability, security and long-term sustainability of outer space activities,” she said.

According to McDowell, the regulations now in place — like the 1972 Space Liability Convention — are a kind of “hangover” from the Cold War and do not address new actors and the commercialization of space.

He said that while commercial use of space should be encouraged, it should be balanced with responsible management of the outer space environment.

“The overall message from both the junk issue and the re-entry issue is, we need reasonable international governance of humanity’s use of outer space,” he said.

Are our courts a playground for bullies? Just ask Catherine Belton

‘They beat me up, because I pleaded not guilty’ In his own…