President Biden on Tuesday proposed a summit with Russian President Vladimir Putin in the coming months, but suggested it take place in a third country – outside of the United States and Russia.

The president spoke with Putin on Tuesday to discuss a number of “regional and global issues.”

“President Biden reaffirmed his goal of building a stable and predictable relationship with Russia consistent with U.S. interests, and proposed a summit meeting in a third country in the coming months to discuss the full range of issues facing the United States and Russia,” the White House said in a statement Tuesday.

The two also discussed the intent of the U.S. and Russia to pursue a “strategic stability dialogue on a range of arms control and emerging security issues” to build on the extension of the New START Treaty, according to the White House.The START Treaty enhances U.S. national security by placing verifiable limits on all Russian deployed intercontinental-range nuclear weapons. The treaty began on Feb. 5, 2011, and according to the State Department, the U.S. and the Russian Federation have agreed to extend it through Feb. 4, 2026.

The White House also said, during the call, Biden “made clear that the United States will act firmly in defense of its national interests in response to Russia’s actions, such as cyber intrusions and election interference.”

“President Biden emphasized the United States’ unwavering commitment to Ukraine’s sovereignty and territorial integrity,” the White House continued. “The President voiced our concerns over the sudden Russian military build-up in occupied Crimea and on Ukraine’s borders, and called on Russia to de-escalate tensions.”

The call comes after a back-and-forth last month between Biden and Putin. 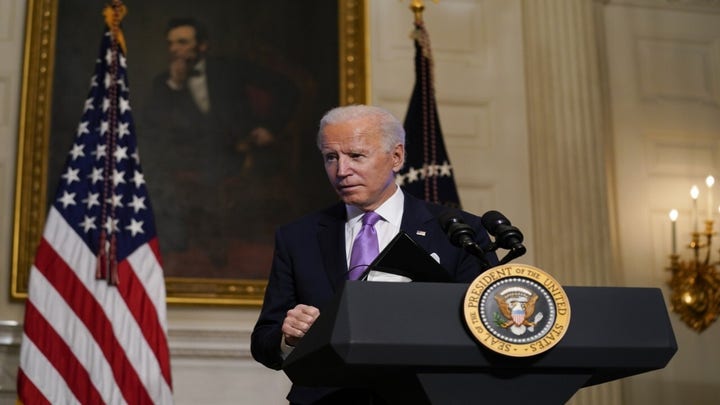 The president, last month, said Putin would “pay a price” following a declassified report from the Office of the Director of National Intelligence which contained evidence of attempted Russian interference in the 2020 presidential election. Biden had also agreed during an interview whether he thought Putin was a “killer.”

“I do,” Biden replied during the interview with ABC News’ George Stephanopoulos.

Putin responded by saying, “It takes one to know one.”

Following those comments, Putin told reporter in Moscow that he wanted “to invite President Biden to continue our discussion, but on the condition that we actually do it live.”

“But with no delays, directly in an open, direct discussion,” Putin said, suggesting they hold the live conversation as soon as Friday or Monday, adding that as the world’s two leading superpowers, he thought the dialogue would prove interesting for the American and Russian people, as well as for the international community.

“We are ready any time that is convenient for the American side,” Putin added.

The White House turned down the invitation for a “live” public conversation, with press secretary Jen Psaki saying the president was “quite busy” that weekend.

Meanwhile, the Kremlin last month said Putin’s offer was intended to prevent bilateral ties from completely falling apart. Putin made it clear that “it makes sense to have a talk to maintain Russia-U.S. relations instead of trading barbs,” and he wanted to make it public to help defuse tensions over Biden’s “very bad remarks,” said his spokesman, Dmitry Peskov.

Russia recalled its ambassador to the United States following the president’s remarks.

The Associated Press contributed to this report.

‘Just peace and quiet’ Journalists identify the man whose…